Though this be madness, yet there is method in it.

These two-player have a "winning strategy".

That means if you pick who goes first and know what to do you can always win.

Can you find the winning strategies for these games?

Game with a winning strategy are extra fun. Whether you win or lose, you and your friends can make progress towards discovering the tricks that allow you to win all the time if the other player does not know the secret.

One Ogre, One House

Many old fairy tales had ogres. These were not friendly, green ogres. They were very scary monsters!

Why were they so scary? They ate people. They especially liked to eat children. But that's not why they were so scary. In fairy tales lots of things eat children: wolves, witches,...

Ogres were very scary because they could use magic to look like anyone. If you went into an ogre's house to rescue a child, and took the child home, it might actually be the ogre! Then poof it would turn back into its normal, big, ugly self and eat you.

This game has an ogre story. Children from two kingdoms are captured and at the ogre's house. They need rescuing!

The kings and queens from the two kingdoms went to a magician and asked, "Could you take away the ogre's power to look like anyone? Then we can be more safe when rescuing the children."

The magician said, "No. I cannot do that. The best I can do is make sure that only the last child is really the ogre. All the children you rescue before that are really children, and safe to rescue.

You are a hero from one of the two kingdoms. On your turn you can rescue one, two, or three children. You cannot rescue more than that because you need to get into the ogre's house and back out very quickly. And you want to leave the last "child" for the other hero because the last "child" is really the ogre!

The game begins with a single pile of objects ("the children") between the players.

A turn consists of taking one, two, or three objects away from the pile. Whichever player takes away the last object looses.

Note: this game is a variant of Nim sometimes called Poison. Lisa Rougetet has investigated the history of these games.

So the ogre from the last game got upset. So many children were getting rescued!

He had an idea. He built another house! He would pretend to be a child, and the heroes would not know what house he was in.

Because he was trying to be tricky, he would not reveal himself when a hero was in his house. The heroes did not need to be quick any more.

You are again a hero from one of the two kingdoms. On your turn you can rescue any number of chidren. But you can only rescue children from one house at a time. And you want to leave the last "child" for the other hero because the last "child" is really the ogre!

The game begins with two piles (usually of ten to twenty objects) between the players.

Players alternate taking turns. A turn consists of taking any number of objects away from one of the piles.

The player who takes away the last object loses.

Note: this game is another variant of Nim.

The game begins with a single pile of objects between the players. Players alternate taking turns. A turn consists of dividing any pile into two unequal parts. Whichever player makes the last legal move wins.

Note: this variant of Nim was invented by P. M. Grundy.

Start with a picture of a daisy with 13 petals. Take turns erasing petals: you may either erase any one petal, or any two petals right next to each other (if such a pair still exists). The person who picks the last petal wins.

Daisy was invented by the famous puzzlist Sam Loyd, who lived in the latter part of the nineteenth century.

Between the players put a piece of paper with the numbers one through nine written on it. Each player has a pile of five identical objects. Players alternate taking turns. A turn consists of claiming a number on the paper by putting one of your objects on it (each number can only be claimed once). The first player who has claimed three numbers that add up to 15 wins (this winning combination need not use all of the numbers that player has claimed). If all the numbers have been claimed without either player winning, the game is a tie.

Fifteen almost has a winning strategy. An expert at Fifteen can always force the game to be a tie. Can you rearrange the numbers one through nine on the paper to make Fifteen the same as another game you know?

Equipment: the paper below, tokens to place on the paper

This is a version of The Factor Game for younger children. (It uses addition and subtraction, instead of multiplication and division.) 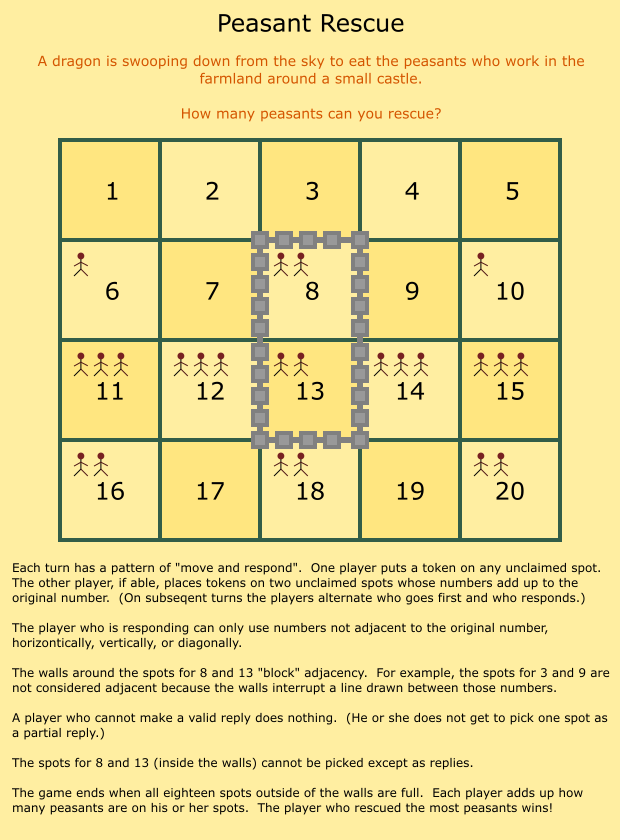 Each turn has a pattern of "move and respond". One player puts a marker on any unclaimed spot. The other player, if able, places markers on two unclaimed spots whose numbers add up to the original number. (On subseqent turns the players alternate who goes first and who responds.)

The player who is responding can only use numbers not adjacent to the original number horizontically, vertically, or diagonally.

The walls around the spots for 8 and 13 "block" adjacency. For example, the spots for 3 and 9 are not considered adjacent because the walls interrupt a line drawn between those numbers.

A player who cannot make a valid reply does nothing. (He or she does not get to pick one spot as a partial reply.)

The spots for 8 and 13 (inside the walls) cannot be picked except as replies.

The game ends when all eighteen spots outside of the walls are full. Each player adds up how many peasants are on his or her spots. The player who rescued the most peasants wins!

Write the numbers one through ten on the paper. Use the side margins of the paper to keep running totals for the two players.

Players take turns crossing out one of the numbers and adding it to their running total. (Once a number is crossed out it cannot be claimed again.)

Equipment: paper and pencil, an object

On the paper draw the game board: six squares labeled one through six.

The game starts with the object on the square labeled six.

Players take turns. On a turn, move the marker to a different square and add that number to the running total.

Two players claim squares numbered 1 through 30, trying to get the highest total.

The players use distinct markers to mark which squares become theirs. (Use two kinds of coins or beads, or write X or O). 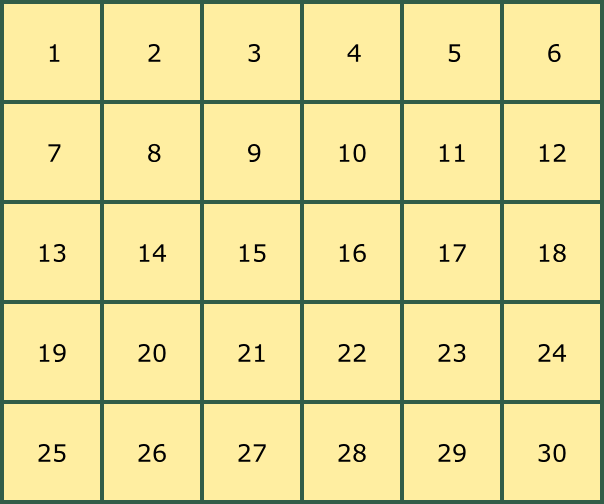 Each turn has a pattern of “move, respond, counter-respond”. The first turn goes like this:

The next turn is similar except the players switch who goes first. Turns repeat until every square is claimed.

I have made an .png image file and a .svg vector-graphics file with both the instructions and a larger grid (1 through 36).

SubDivvy was created by Daniel Fendel and Diane Resek, and was originally published in Foundations of Higher Mathematics: Explortion and Proof (1990) by Addison-Wesley Publishing Company.

Before play begins, the players make a rectangular grid of dots on the paper. The rectangle should be at least 6 rows long and 6 coulumns wide.

Players take turns connecting adjacent dots with a vertical or horizontal line. If such a move completes a box, that player initials the box and gets to move again. The game ends when no more moves can be made, at which time the winner is the player who made the most boxes.

Note: Normally a "box" means a square of the smallest possible size. What changes if larger squares also are allowed to count as "boxes"?

Start sprouts with two or more hollow dots on the paper. Players take turns. A turn is drawing a curve connecting two hollow dots (the curve can start and end at the same dot), and then adding a hollow dot to the middle of this new curve.

The last player that is able to move wins.

Winning strategies have only been found for games that start with between one and six hollow dots.

Before play begins, the players take turns drawning some dots on the paper. The total number of dots should be a multiple of six. Do not just draw dots in rows and columns.

The players take turns connecting three dots with two straight lines to make an angle. The lines drawn may not cross or touch previously drawn lines; in particular, each dot can only be used once. Play until no more angles can be legally drawn. The player whose angles sum to the largest number of degrees wins.

Take Over the Geoboard

Before play begins, each player makes one shape on the geoboard with a rubber band. These will be called obstacles.

Then players take turns claiming a corner and using a rubber band to make a triangle in this corner.

Whichever player's territory contains the most area at the end of the game wins.

Pencils on a Table

Start with the table top clear. Take turns placing a pencil anywhere on the table, so that the pencil you put down does not touch any pencils previously placed. The first person who cannot legally place a pencil loses.

Play in groups of four. Pick a starting attribute block. Randomly deal out the other attribute blocks among the groups, so each group has the same number of blocks. Each group is also assigned 1 or 2.

Players take turns adding one block to the "train" of blocks. Each new block must differ from the previous block in one/two ways, as assigned. (Attribute blocks can differ in color, shape, size, or thickness.) Keep taking turns until every block is used.

The group wins if the completed train is a loop: going from the last block to the first block is also a valid step.