So Einstein was wrong when he said, "God does not play dice." Consideration of black holes suggests, not only that God does play dice, but that he sometimes confuses us by throwing them where they can't be seen.

These games ask players to make decisions based on the numbers rolled with dice.

Most of the games are fun for all ages. But a couple require careful arithmetic.

No Pigs! No Pigs!

The game always has five rounds. 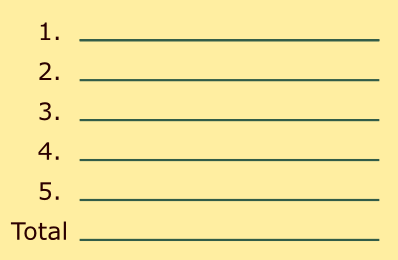 For this game, the 1s on the dice are called pigs.

Each round begins with rolling both dice. If either die rolls 1, reroll how that round starts until neither die is 1. Now the players choose to either "play it safe" and keep the total of both die or "be risky" and go for a running total.

The round ends either when all players have "played it safe" or when either die rolls a 1.

The game ends after five rounds. Players add up their score for a grand total. The highest total wins.

Note: This game is a variation of the old British game named Pig.

Equipment: a pencil, two six-sided dice (one of which is labeled 5 to 10), the game paper below

The game uses a blank five-by-five grid, like an empty bingo board. The center spot is a "wild" spot that both players can use to win. 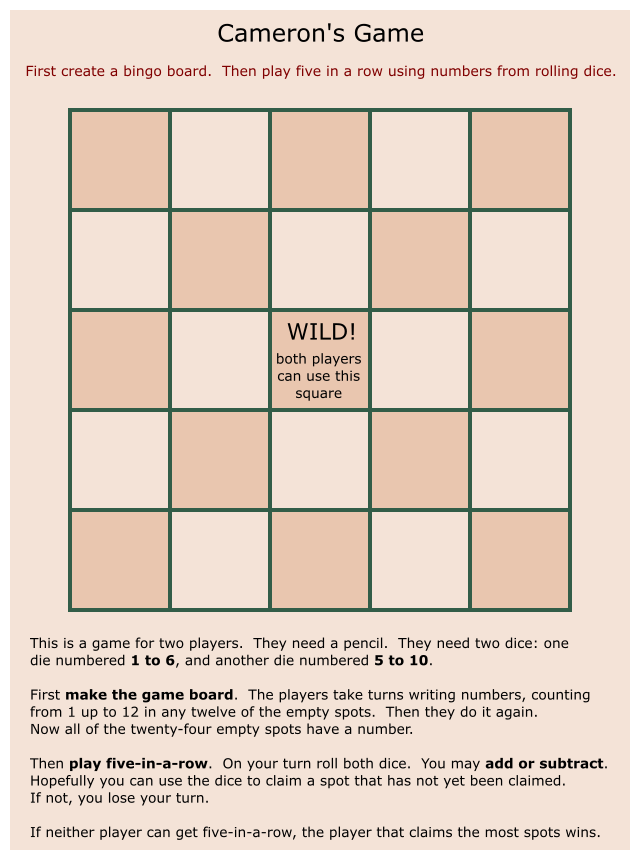 The other twenty-four spots need a number. So before the game starts, the two players fill up those spots with numbers. They take turns writing numbers, counting from 1 up to 12 in any twelve of the empty spots. Then they do it again. Now every empty spot has a number.

The basic game is to play five-in-a-row. On your turn roll both dice. You may add or subtract, which provides a choice of two values. Hopefully one of those two values represents an unclaimed spot on the board, so you can claim a new spot. (If not, you lose your turn.)

If neither player can get five-in-a-row to win, the player that claims the most spots wins.

Equipment: a six-sided die, two types of objects to represent tens and ones (see below)

The game always has six rounds. In each round, the die is rolled and each player chooses to take that number of either tens or ones.

A running total is kept for each player. After six rounds, whomever is closest to 100 withut going over wins.

Note: There are many fun ways to represent ones and tens: pennies and dimes, Base Ten Block units and tens, Cuisenaire rod ones and tens, tiles and taped strips of ten tiles, beans and popsicle sticks on which ten beans are glued, sticks and bundles of ten sticks, etc.

Players each use a game board with empty place value spots for ones through ten-thousands, as well as an extra spot labeled "reject".

The game always has six rounds. In each round, the die is rolled and each player picks where to put the rolled number: in a unused place value spot or in the reject box. After six rolls, the player with the largest number wo can read it aloud wins.

For a "beginner" version of the game that can help teach the concept of place value, use fewer digits.

Here is a version with three digits (and the reject box) that is useful to an average first-grader that somewhat understands the concept of hundreds but is still a bit foggy about thousands. A game would involve four rounds, since there are four spots to write a number.

The Caves of Wumpus and Grue

Play alone or cooperatively with friends! Roll dice to explore a cave system of 16 rooms. Hunt the wumpus! Don't get eaten by a grue. 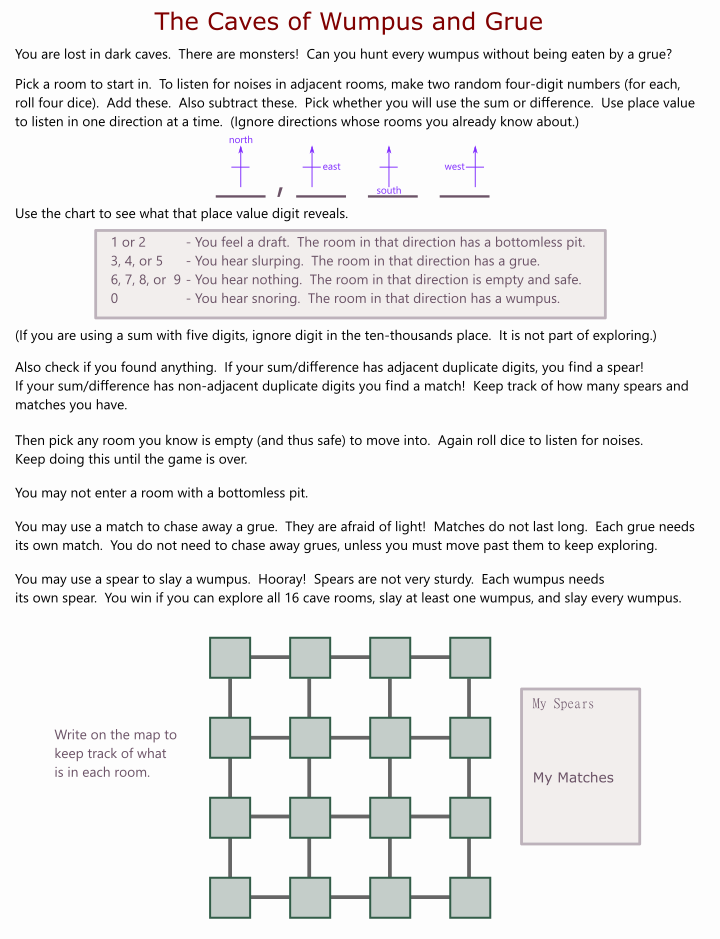 This game is, of course, a tribute to Hunt the Wumpus and Zork.

Equipment: one game board per player

This is a fun version of battleship. Players can shoot "rays" instead of always targeting one board square at a time.

(In December 2013 I glanced over this WSJ article, which mentioned a game named Battleship Numberline. I misread the name as "Fraction Battleship" and was disappointed that the game was not about equivalent fractions on Battleship boards. So I invented the game I had in my mind. There is some subtlety involving the shapes of the ships and how to fit them in between the common "rays" made by equivalent fraction combinations.) 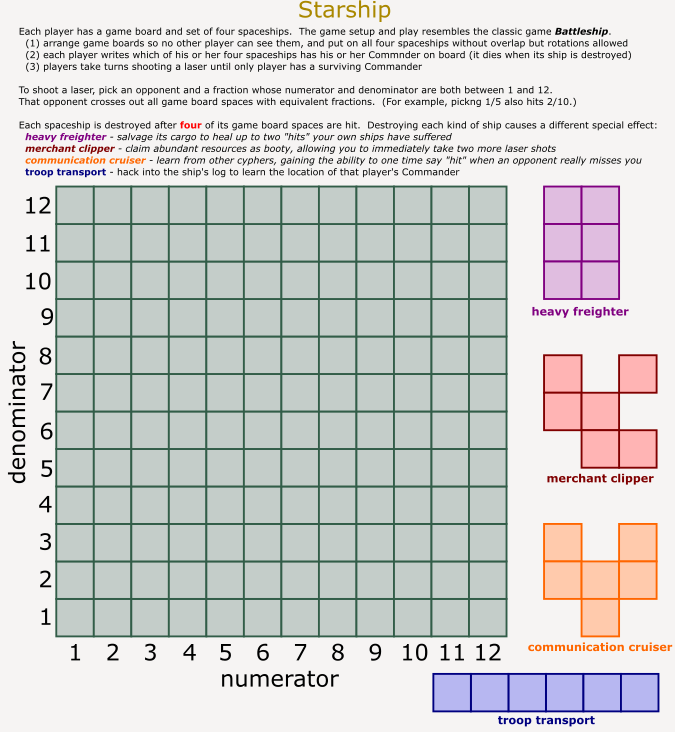 Equipment: one game board per player, one twenty-sided die (percentile dice may be used instead to teach about percentages)

Each players draws a five-by-five bingo board with five "free" squares as arranged below. 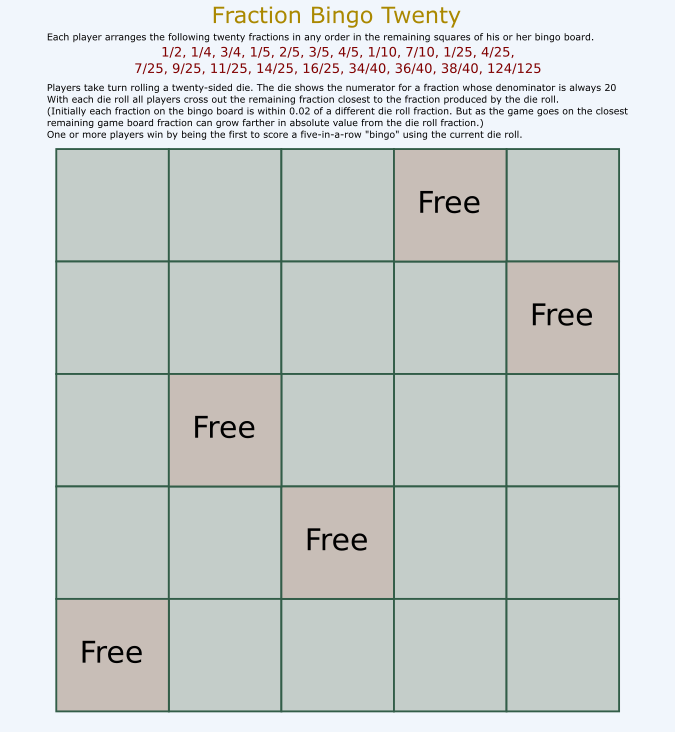 Each player arranges the following twenty fractions in any order in the remaining squares of his or her bingo board.

Players take turn rolling a twenty-sided die. The die shows the numerator for a fraction whose denominator is always 20. With each die roll all players cross out the remaining fraction closest to the fraction produced by the die roll.

(The fractions are carefully chosen so that even different-looking pairs can be compared by "unreducing". Multiply the denominator by a number to change it to 100, then be fair by also multiplying the numerator by that number. Initially each fraction on the bingo board is within two-hundredths of a different die roll fraction. But as the game goes on the closest remaining game board fraction can grow farther in absolute value from the die roll fraction.)

One or more players win by being the first to score a five-in-a-row "bingo" using the current die roll.

The fourth and fifth grade students I work with love this game. It has just the right blend of cooperation (working together to determine which remaining fraction is closest in value to the die roll fraction) and competition (getting "bingo" first).

The classic game Twenty Four involves four numbers supplied by a moderator, dice, or cards. Players or teams race to use these numbers along with any arithmetic operation, parenthesis, or fraction bars to get to 24.

Each of the four provided numbers must be used once and only once. Two answers are considered the same solution if they only differ by having terms rearranged.

Can you find any of the other answers? There are at least seven more!

In the classroom it works well to divide the class into three teams that earn points by finding correct answers. Most sets of four numbers provided will have many possible answers, so do not stop just because other teams have found some answers.

Here are more examples of four provided numbers, with each set having many answers.

Equipment: four six-sided dice are shared, each player needs one gameboard, a pawn or other marker, and book to hide those behind

This game is my simpler way to make Twenty-Four more fun. Having multiple target numbers makes the game fun even when students have different amounts of arithmetic proficiency.

Each player moves a pawn along the path, racing to get to the end first. But the players do not know where each other's pawns are.

On your first turn, roll 1 die and move that many spaces forward.

On later turns, roll 4 dice and try to use all four numbers and basic arithmetic to make a certain number.

Finally, you can always decide to skip rolling dice, and simply move forward 1 space on your turn. That can help you get past spaces whose numbers are difficult to make (such as 17 and 23). 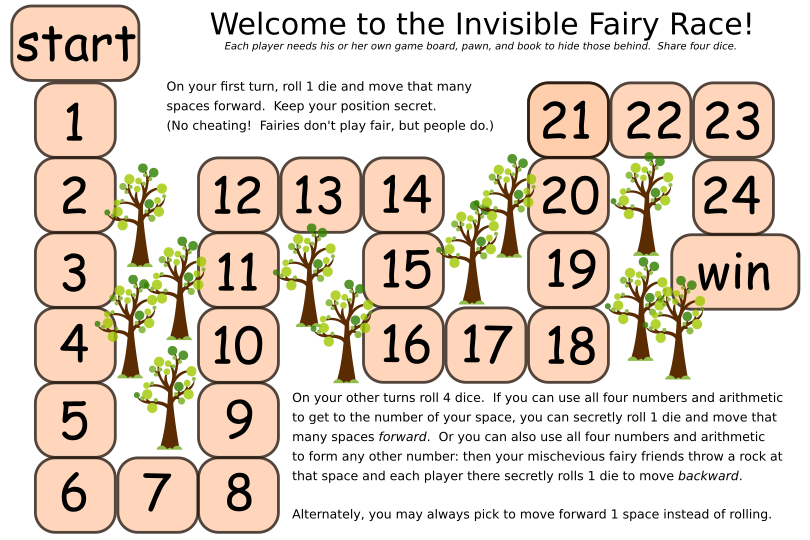 Contig (and Contig Jr.) are nicely enhanced versions of Twenty-Four by MathWire. These games are available here.

As with The Invisible Fairy Race, multiple target numbers allow the game to be fun even when students have different amounts of arithmetic proficiency.

The Kittens of Tindalos

Start the game one pattern block of each shape. Each block counts as one "room" in the world Tindalos.

Your turn has four parts. 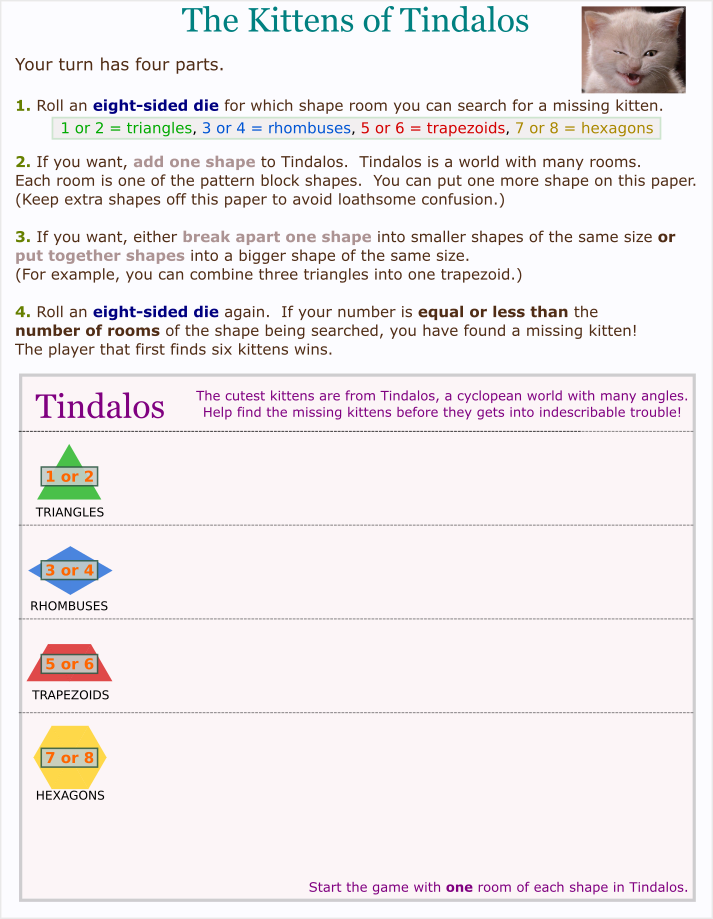